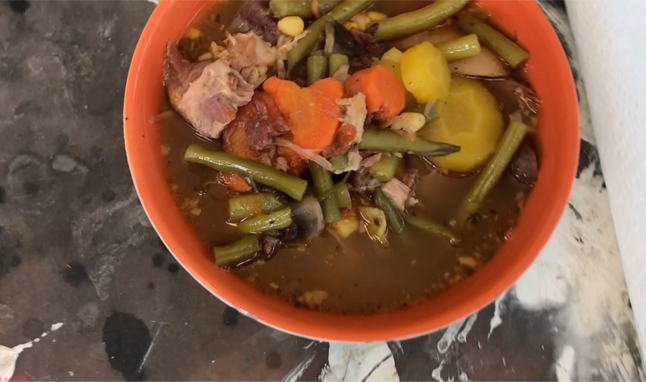 The movie opens with our heroes running through a wooded area away from something screeching at them. After taking shelter in a water tower the sheriff character “Jake” LETS the monster in? To trap it? this is when we see that they’re fighting Dinosaur bones.

There is then a very dramatic cut to apple chancery font reading “Triassic Attack”.

After super brisk credits we a treated to a very small, and lethargic protest of locals led by the local Native American man “Dakota” asking for building crews to be removed from their land. We’re informed several times in several seconds that the locals sold their land to white folks, and then felt remorseful and wanted it back. This is a movie literally centered around the old racist adage “Indian Givers”

We’re also informed that this Native American man is our hero Jake’s uncle and that the evil corporate fat cat (who works at a university?) stole Jake’s wife away.
There is also a weirdo with giant stun guns (Wyatt)… I’m not sure what he’s here for or why he’s allowed to have giant stun guns. He seems like a threat to the town’s safety.

Moving on a 30-year-old frat boy begins to hit on “Savannah” played by Emilia Clarke. After learning that she’s a quarter native American he even offers to show her his “teepee” does that mean penis? It totally means penis.

On the eve of construction, we see Dakota in the museum surrounded by artifacts, and novelty “Indian” toys. So of course, he decides to wreck up the place. We’re not sure if he owns the museum or if he just owns a gift shop, that resides in the museum.
But while wrecking the place up he finds an old tome for some sort of magic that he believes will save the day. Because if protesting doesn’t work black magic is always a good back up plan?
Also, cut to Emilia Clark sleeping, being affected by the magic because… she’s one-quarter Native American?
Also, the magic, is causing the fossils to come to life. Whoever did the research for this film should have been informed that the fossils in museums are made of plaster, they’re not the actual bones.

Back at Wyatt’s trailer, we see that he’s the local VCR repair and bug zapper, so still no answer on why he’s allowed to have giant stun guns. But we do see that he gets to have a Jurassic Park 2 rip off scene where his trailer is tipped over by a Trex… in this instance a Trex skeleton.

Note: they make a point to show everything is run down. Even the police car has a hard time starting up.
Note: Savannah who was previously grounded for attending the frat party (as a 16-year-old) is allowed to on a camping trip with the college students by her mom who is obviously an A+ parent.

The next morning, we see the construction site for the new college expansion has been vandalized, with only one suspect to go on Jake and literally the only other officer in town completely ignore all evidence and go to question Dakota. They completely ignore that they both stepped in a giant Trex foot-print. HOW DID THEY MISS IT?

Meanwhile back at the dig site, we see Emma (Jake’s ex, Savannah’s mom) teaching her archeology students about how to dig, but the only lesson they seem to be learning is how to hook up in the most awkward way possible.

On the Frat camping trip there are more pledge initiations. Emelia Clarke watches as her boyfriend is humiliated and constantly gets yelled at by the 30-year-old frat boy who now spends his time shouting at her. “You think this is hard? Do you know what we had to do to get in in my day?” He even says to her. What day was this? 1939? But instead of taking the obvious crack at this doughy, 30-something who still torments pledges as he’s never successfully been able to graduate college the movie continues down a problematic rabbit hole and makes a gay joke. Yay.

Meanwhile back nerd hook-up town: Population the worst actors in the movie. The only ones getting boned in this movie are the teens murdered by re-animated bones.

This movie focuses way too much on the toxicity of the relationship between Emma and Jake. One second they’re at each other’s throats and the next second they’re asking each other to do favors for one another because of old times?

The only one apparently figuring anything out about these dinosaur bones is Wyatt who seems to be exclusively in this movie to set up Jurassic Park rip off scenes.
The movie is saved when the 30-year-old frat boy is murdered by the t-rex and literally no one tries to save him.
Knowing what’s most important Savannah’s boyfriend doesn’t try to save his friends and fellow pledges, he instead goes to save his and Savannah’s clothes, leaving behind her cellphone, their only way to contact anyone to let them know that museum quality fossil replicas have attacked the frat camping trip.

Finally, Emma and Jake get to the lake to find dead campers. This is the first time anyone notices the foot-prints, which have been in almost every scene.
“You can’t fake this” Emma tells Jake in reference to the foot-print. This is good news for every bigfoot hunter in America.

The teens finally find Dakota riding backward on a horse. Emilia Clark informs us he’s having a vision, and that she knows this because her great grandfather was a very powerful medicine man. WHAT!? Where was this mentioned at any point in the first 45 minutes of the movie?

Wyatt finally meets up with Jake and Emma and for once our Dr. Phil style duo get a chance to see the dinosaur bones, in-fact they get to be chased epically by a raptor skeleton. The sense of danger is heightened by the fact that Jake’s police jeep won’t start. Because y’know, the county can’t afford to fix his 1998 Jeep Cherokee. When the jeep finally starts Jake rams the raptor with his car, causing it to explode like a bone piñata. But these boney dudes don’t stay down for long, because, magic. Instead of getting back into the jeep and driving away from the reassembled raptor Jake tells the crew to RUN FAST. This brings us back to the start of the movie and leaves us with almost as many questions as pre-opening credits scene.

Here we are again, Jake vs the raptor in the water tower. This time we see that Jake narrowly escapes… a fact they clearly re-edited from the first scene.

Note: Every single time there is a fossil attack scene the FX team completely changes the look and feel of the shot. There is a different frame rate, they do a shaky cam, and the saturation and white balance make it look like a Rob Zombie movie!!

We finally learn what the hell Dakota’s spell was about. He asked a protecting spirit to defend the town from it’s new legal owners. But instead it possessed the dinosaur bones. Which again, no one had informed him are just plaster!

After trapping the raptor in the water tower Jake decides it’s time to call for reinforcements. Who does he call? More officers? The national guard? No, the local school’s ROTC program. That’s right, he calls teenagers.
Side note, the ROTC corporal who answers the phone looks like he might be the 30-year-old frat boy’s brother. Small town? Small casting call? You decide.

Back at the museum we finally find out that lighting weakens the fossils. So, I guess they’re water type pokemon?

Note: This movie is set in Oregon… where there aren't fossils of any of the dinosaurs we see in this movie.

Finally, our big action scene starts. And Jake blows up the fossils with ROTC issued rocket launchers. He thinks it’s over, but, he seems to forget when he hit one of these guys with his car the bones magically reassembled. Well, this time since he blew up the pterradactyl and the trex at the same time the pieces all reassembled into one big mega dinosaur.

So, now Emilia Clarke is singing the rain chant for Dakota’s ceremony to bring down fire. So fans of GoT should be pleased to see that this is one of her earlier white savior roles.
While performing the rain dance Dakota is struck down, and the only other officer in the movie “Deputy Savage” is batted out of the park with a flick of the trex-adactyl-adon’s tail.

After Dakota is wounded, he and Jake finally connect over their native heritage, and Savanna steps up to perform the rain dance, lightning ritual. This also FINALLY explains why Wyatt was introduced with giant stun guns so they could have lightning on demand!

The only joke that really seems to carry off well in this movie is in the last 6 minutes of the film when Wyatt is attempting to create lightning on demand. He informs the audience that he can do this because he used to work at the power plant for 8 years and was laid off. “It’s okay though, it really let me chase my dreams.” Flashback to the start of the movie when we’re introduced to Wyatt’s trailer, a VCR repair shop, and “World’s largest collection of light bulbs.”

As the events of the movie come to an end the teams carefully laid plan fails as the trex-adactyl-adon’s tail slices through power line knocking Emily Clarke out of her trance. Leaving us to wonder, was magic even necessary to defeat these guys, it seems like all they needed was a big electric current.

The movie ends with a ribbon cutting of the new museum headed up by Dakota who apparently receives no punishment for summoning fossils and killing half the town.
Emma and Jake get back together, and we’re still not sure if college bulldozed the town or not.
It’s all very neat and tidy, but it answers almost no questions as to the movie’s plot. All we know for sure is the pastor cast fossils in the museum came to life and killed everyone, and magic or electricity killed them. This was the spark – pun intended- that saved the marriage of Emma and Jake and brought their family back together.

Start off by putting the heating up the olive oil in a large stock pot, and add in garlic and onion. Stir occasionally so that the nothing sticks, keep this up until the garlic and onion is soft and transparent.

Next, add in the ham-bone and plenty of water. Let this boil for a few hours.

While the hambone is boiling peel and slice the carrots.

Dice the potatoes into large square portions, do not peel the potatoes. The skin gives extra flavor.

Thinly slice each of the mushrooms.

When the ham has started to fall off the bone pull it out of the water and remove all of the remaining meat from the bone.

At this point, you can add your spices, canned veggies, and fresh veggies. Once they've had about 15 minutes to simmer ad in the remaining meat from the ham bone and cover the stock pot with its lid.

Let everything simmer for at least 45 minutes further and it'll be ready to serve.

Hannah's Note: Personally, I leave the whole completed soup for 2 or more hours this gives it the best flavor.

Looking for family and portrait photography?

Our mission is to provide quality design and visual marketing services to our clients in a fun and affordable manner.